Christina Brodbeck came to Silicon Valley determined to make her way in tech. With a master’s degree in instructional technologies and multimedia design, she worked her way up from a job at a bookstore to become a founding team member at YouTube. She was their first UI designer, responsible for the majority of the site’s early design, and then led YouTube’s mobile design. She has since co-founded theicebreak, an app and website that helps couples enjoy and make the most of their relationship. 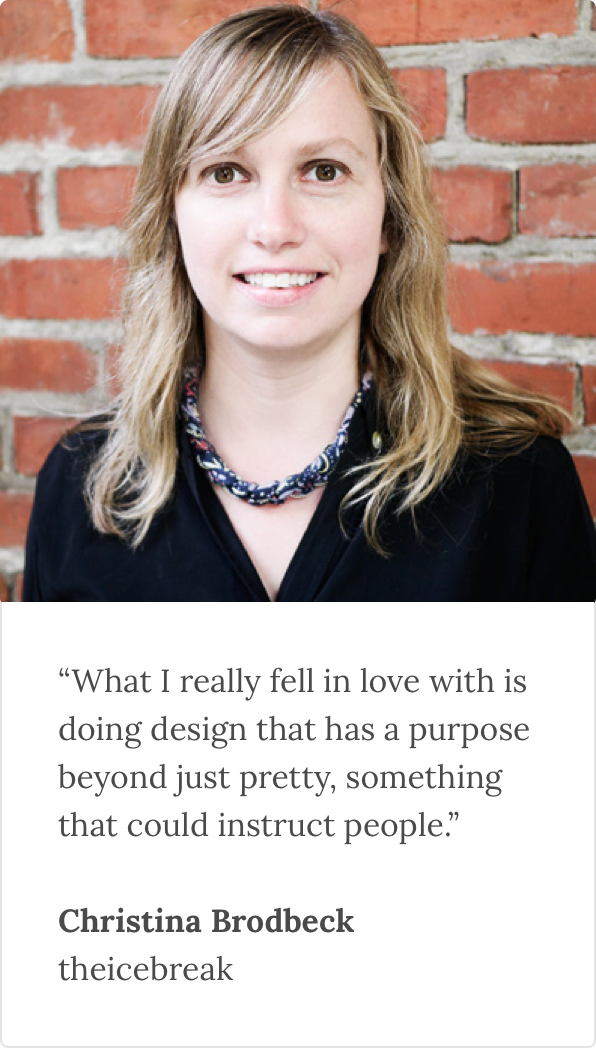 What are some of your earliest entrepreneurial stories?

I went to Japan and did a homestay six hours outside of Tokyo when I was about 13 years old, and I saw that people there were obsessed with American goods. When I came back, I decided to make and sell backpacks. I somehow convinced my grandma to hand sew them. They were just pieces of cloth with straps on top. I never sold them anywhere, but that was an example of how I wanted to seize an opportunity.

I also remember once when my neighborhood friend Aubrey and I had a lemonade contest with two other kids to see who could sell the most lemonade. The other kids had a stand, and Aubrey and I went door-to-door. We were able to sell way more lemonade. It was awesome.

Any other formative entrepreneurial projects or influences?

My dad’s grandfather really inspired me. He started a brass works foundry in Cincinnati called The Schaible Company. They made faucets, the kind with a single handle that you pull up and change the temperature by moving it back and forth. They did really well and were acquired by American Standard. My dad’s grandfather only had the equivalent of a 5th grade education. He started from nothing and was very entrepre- neurial. He wrote a book called I Was Interested. I was constantly inspired by him, even though I never met him.

When did you first encounter the word “design” and how did you get into it?

I probably didn’t know what design was until I was doing it. I never thought that I would do anything related to tech. Math and science were far from my favorite subjects. So when I went to college at University of Illinois at Urbana-Champaign, I tried to avoid those subjects as much as possible and majored in Russian history. My freshman year roommate was a computer science major, and I saw her playing around with Photoshop and HTML. I was curious about it and ended up picking up this book HTML by Example and then made a GeoCities website myself. I thought that making websites was amazing, but it didn’t really dawn on me that I was work-ing on technology because it felt creative. Before getting into making websites, I thought technology was cut and dry. When I got deeper into it, I saw how web design blends or combines the creative and the logical very well.

What were some inflection points for you after that discovery?

I spent as much time as I could building websites for people, even for free. Like wedding photo websites, anything. Then one summer I took a web design class at Loyola University of Chicago where my dad taught physics. Blackboard hadn’t come out yet, and as a side project my dad and I wanted to create a way for his students to submit their homework online. So I spent the entire summer—except for when I had class—with my dad in his office learning and writing Perl and designing the site. I’m surprised that anything worked, but it did, and he used that for the next year and a half for his classes. That was a big learning experience for me. That sum- mer was my first formal training.

Then my last year at University of Illinois, I got my first real paying job. I worked for the U of I extension program. Their office managed a variety of different educational websites. One was about Herman the Worm and teaches kids in kindergarten through 4th grade about worms and science, one was about deer of Illinois, and some were for 4H. I worked there for three months and got paid. That was pretty awesome. After that, plus what I had done with my dad, I really knew that I wanted to go into design. I loved doing it and was doing it in all of my free time. What I really fell in love with is doing design that has a purpose beyond just being pretty, something that could instruct people.

Then I moved to California and got my master’s degree in Instructional Technologies and Multimedia Design.