After growing up in India and earning a PhD in psychology, Rashmi Sinha went to UC Berkeley for a postdoc where she switched her focus to human-computer interaction. She then left academia to start her own user-experience consultancy and developed MindCanvas, a game-like tool for user research. Simultaneously, Rashmi and her husband built SlideShare, a site for people to share presentations online, in just six months. Since its launch in 2006, more than 9 million presentations have been uploaded to SlideShare, helping professionals connect through content. LinkedIn acquired SlideShare for over $100 million in 2012. 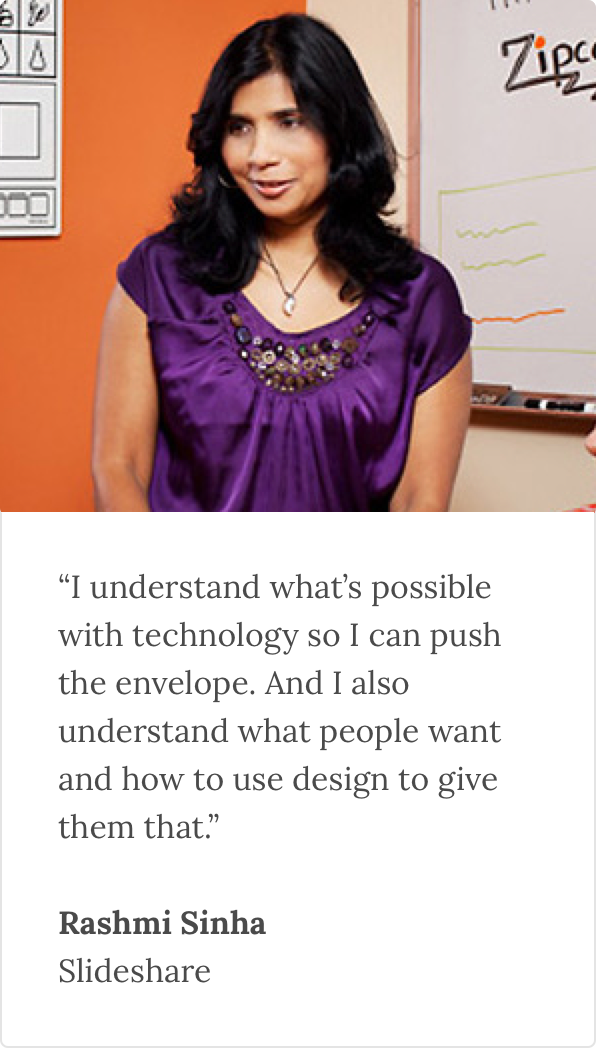 What are some of your earliest entrepreneurial stories?

I did not particularly set out to be an entrepreneur or dream of it. However, I always wanted to do something that I would drive myself and be independent and do things my own way. Basically, do my own thing. That has felt much more important to me than being an entrepreneur. I did what came to me or interested me intellectually or I felt passionate about. And at a certain point, I passionately wanted to build this product and realized for the way that I wanted to work, being an entrepreneur was probably the right path for me. So to me, entrepreneurship was an accident. That’s the reality.

What were your interests in school or did you start anything when you were young?

I did a lot of different activities, from drama to debate to sports. And I’ve always been the sort who got groups started, that’s how I explore a field. Like when I went from cognitive psychology and neuroscience to human-computer interaction [HCI], I started the East Bay chapter of the BayCHI. All along the way, I’ve created groups of like-minded people.

You mentioned moving over from cognitive psychology to HCi. How did that happen?

I earned a PhD in cognitive neuropsychology at Brown University. While I was there, I took some computer science courses with Andy van Dam, so I had some exposure to the HCI way of thinking. I took a really interesting course in designing educational software. I learned to love programming and was able to use what I knew about human beings to design this educational software. That was my first experience.

Then I came to UC Berkeley to do a post doc, and I always say it’s the Bay Area water that got me to turn to HCI. It happened in a very specific manner. I was reading about recommender systems and Amazon’s way of suggesting items to you based on another item you like. There were a lot of different recommender systems that were getting popular in music and other domains. The article talked about the algorithms and how to build the systems. And I thought, “These are problems of psychology, of understanding how human beings think,” and it really interested me. It felt like something I would love to understand and do.

So I met with some computer science professors on the UC Berkeley campus who were focused on this, and they said that having people with a psychology background working on these problems made a lot of sense. So I switched from the psychology department to the School of Information. Professor Marti Hearst and Ken Goldberg brought me over and helped me in the transition. It happened really fast. I read about recommender systems, found it interesting, and within a month was at the School of Information. I worked for awhile with Marti Hearst doing research on search systems and recommender systems, basically to understand information processing. I worked with a team of computer scientists mostly and brought in the perspective of how people think, how to design systems, and how to test those systems.

What projects during that tenure stick out to you particularly?

I wrote some papers on recommender systems about how there’s more to them than just the algorithms. Because that design problem is a really hard one. Recommender systems do not just say that this is the most relevant thing, but that this is the best thing for you. The challenge is to have it not come off as creepy. Or like there was a joke about when you searched for a particular book on Amazon and they’d recommend you some underwear. These mistakes can happen, and people have a hard time understanding why the system recommended this when they searched for that. So by working on that problem, I really understood those systems and how to design them so you feel like you understand the logic of the system.

I also worked with Marti on metadata search engines, and that’s still a difficult design challenge. You can have all these different types of metadata, how do you make it easy for people to browse them?