Yves Behar, an industrial designer from Switzerland, came to Silicon Valley during a time of immense technological innovation and had a front row seat at the subsequent dotcom bubble. Over the past decade, his design studio fuseproject has produced a remarkable track record of products and brands as diverse as the Herman Miller SAYL task chair, the XO laptop for One Laptop per Child, Jawbone and its line of headsets and Jambox, and recently Ouya and its video game console. Fuseproject has also pioneered a unique approach to working with startups through a design venture business model. 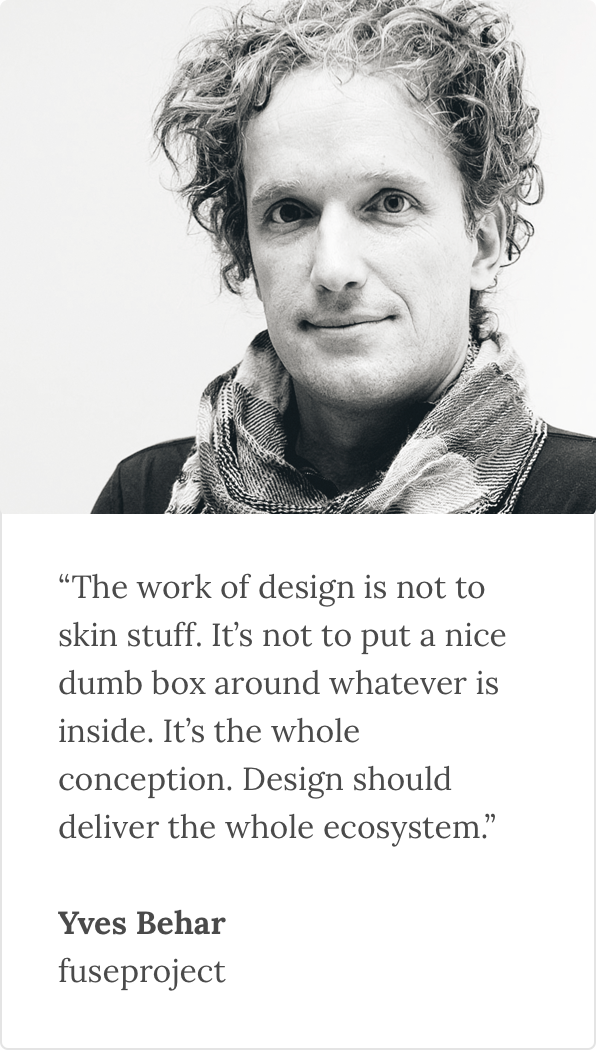 What are some of your earliest entrepreneurial activities?

When I was a little boy, I often went to Turkey to visit my family in the summer. We’d go to these traditional Turkish shops that sold carpets, furniture, crafts, bags, leather goods, et cetera. I was probably six or seven, and I would walk around these shops. I have a particular memory of going to the bazaar, this place where you shop and negotiate amidst a lot of excitement. So one night, my mom folded the pants I had worn and all this money flowed out of my pockets, hundreds of little Turkish coins. And she was like, “What is this?” I had picked them all up from the old-fashioned Turkish shops. Turkish currency used to get devalued on a regular basis, so store owners just throw little coins everywhere as good luck charms. In every corner, under every chair, there are hundreds, thousands of coins around the store. And I thought, “This is awesome! Does nobody else see this?” So, I picked them up, and my parents had a good laugh. I don’t know if that’s entrepreneurial.

It definitely is. so did you go to design school in switzerland?

I went through the German and French school system that is typical there, and I was on a University track. I graduated from high school in Lausanne with a Gymnasium diploma. All my friends were going to become doctors or bankers; there weren’t many choices there back then. There were no design schools. My girlfriend at the time wanted to be a fashion designer, but there was no fashion design school either. The Swiss government paid her to go to Paris and study fashion design.

I wanted to be a designer. So when I graduated from high school, I went to a drawing skill center. I knew I needed to be a better draftsman and to learn how to express my ideas better before I applied to art school. It was a little private school on the fifth floor of this office building, and the students were essentially retired folks drawing flowers and teenage dropouts whose parents didn’t know what to do with them. I spent six months just drawing flowers, making art.

My goal was to apply to Art Center College of Design, the famous design school in Pasadena. They had opened a campus in Switzerland about the same time, which was a bonus as I could study near where I grew up. I made it there and midway through the program transferred to
the Pasadena campus. When I graduated I came up to San Francisco because it was where the design jobs were. I call myself an economic refugee from Switzerland. Also San Francisco has great wind and I loved windsurfing and had been doing it since I was 16 years old. The future was being created here and at the same time there were great beaches.

Can you talk more about your trajectory from then to now?

The amazing thing is when I first came here from Europe, people were like, “What the fuck are you doing in America? There’s no design in America.” They were adamant I would kill my career before it even had started. I would talk to the mainstream design media in Europe, all these magazines that in many ways have sustained the business by publicizing design, and it was the single most common question, always. And, by and large, it’s still like that: Europeans think that the capitals of design are Paris, London, and Milan.

When I first came to America, it was a bit of a desert and people didn’t even know what industrial design was. When I told people that I was an industrial designer, they thought I made factories! I used to get that like five times a month. Now, it’s like once every couple years. Essentially there was very little knowledge of what design is, despite the fact that American mid-century design in the ’50s and ’60s showed the best of what design can do. In many ways, that has been lost and forgotten by the larger public.

When asked where design leadership comes from now, I say that the capital of design today, in my opinion, is the Bay Area or maybe Seoul. The tools and the interactions of design that people experience everyday are being created now in these places.

I came to Silicon Valley in the mid ’90s and it seemed like all the things that were going to be critical for the future were being invented at that time. For example, the first Apple laptop was done in one of the studios that I worked at. I worked on the first home computer line that Hewlett-Packard produced, the Pavilion, and it became number one in the world.

It seemed like these tools were going to be essential to the way we live, but nobody was designing them with intent and with a larger context in mind. I got frustrated because my work became just about designing boxes, the exterior surfaces. I was working with HP, Silicon Graphics, people making computer designs that weren’t really performing any differently. It was packaging design. Aaron Betsky curated a show at the SFMOMA around that time called “The Dumb Box” about all of the boxes being made in the Valley. I didn’t think that was interesting. It was more of a decorator’s job than a real designer’s job.