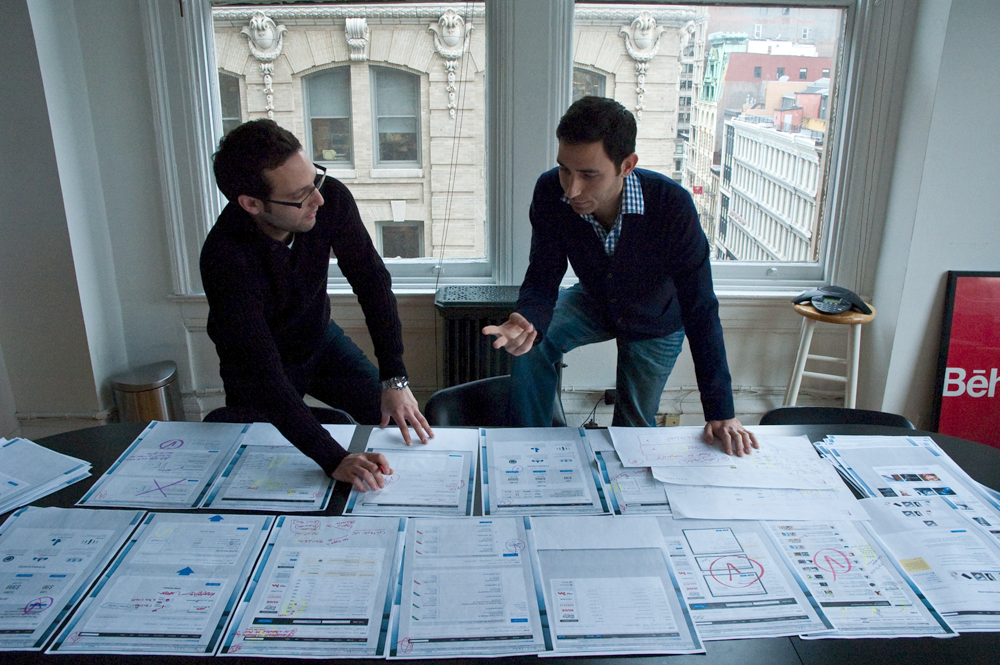 Note: We’re less than a week away from our Kickstarter deadline! Help make our nonprofit book and distribute it for free to students worldwide here.

Last week we interviewed Scott Belsky and Matias Corea, the founders of Behance and the 99% Conference, for the Designer Founders Book. Scott left his job at Goldman Sachs and Matias was freelancing as a print/identity designer when the two joined forces to create an online platform for creatives to showcase their work. With almost no funding they have built a profitable business with over a million users. Below are excerpts from their candid take on entrepreneurship, designer founders, and how to build a business that changes the world.

Scott Belsky: If you outsource design, if you outsource technology, if you have all these different things being done by different people who don’t have respect in the company or aren’t being treated as founders, this stuff is all reflected in the DNA of the business. The DNA of our business is the result of the types of people that we brought in, the type of autonomy they had, the respect we had for each other.

Scott Belsky: Entrepreneurship done right is a consistent humbling of what you don’t know and what you need help with.

Matias: What I found in Scott is he is intensely passionate. This energy. I don’t find this in many people. You could look at him and understand that he was going to do this, with you or without you. And then, I was like, “I want him.” Because I’m as crazy passionate about things I care about. If I was going to take on any risks, it needed to be with someone as passionate in life and in doing something as he was.

Embedding design from the start

The first project Matias and I worked together on as co-founders of this business was going over the logo for an entire week. He was training me on what Helvetica is, what kerning is, and how the typography is the seed of what we are going to build as a company, which was just mind-boggling to me.

Scott: Another mistake we made is we were trying to be unique. Like, I remember we called creative fields “realms,” and we called groups “creative circles.” And when users get there, they’re like, “What the hell is a realm?” There’s a message of sometimes you should use a ubiquitous term and sometimes you should be un-original because it’s making people’s lives easier.

Matias: starting a business, there’s no security. But you have to have the vision that you’re doing something big. And I think that is something that Scott and I share. We’ve been asked so many times, “So, what’s the exit strategy?” We haven’t even talked yet about exit strategy because we don’t have one. Exit strategy is making a massive business that changes the world. Or at least, part of it, and that’s not an exit.